The sticker sheet works both horizontally and vertically.

Feel free to modify and change anything.

I have one teacher who gives out stickers all the time for every little thing the kids do. I can’t control that, but I asked her what she typically rewards students for and made this new sticker sheet. Each category is different and separate so the teacher is free to give out stickers and I can keep my sanity and not outsource my laminating and cutting to some 3rd world country…

To download some prizes I’ve made visit the Prize Page.

Or you can make your own like I do: Photoshop tut (Making prizes)

This game uses no dice. Game pieces can just be the student’s erasers or pen caps. One student is the ‘King’ and the others want to become the new king. Best played in groups of 3-4. The students will take turns playing rock-scissors-paper with the ‘King.’ If they win they can go 3 spaces, if they tie they to 2 spaces, and if they lose to the ‘King’ they will go one space. They must ask the ‘King’ for permission as they land on the appropriate spaces. e.g. if the 1st student loses to the king and lands on (1) then they have to ask the king, “May I go to 4?” Then another round of rock-scissors-paper is played. If the player wins then the ‘King’ grants the request, (Yes, you may.), and the player can move to (4). If the ‘King” wins then the request is denied, (No you may not.), and the player has to stay put. Each space that has a request asked to the ‘King’ has the Loss / Win results beneath the request.

When a student reaches the end and becomes the new king the game begins again from the start.

You may change the Loss / Win values if you want or use the blank template I’ll provide here to use your own grammar point. Even if you don’t know how to use photoshop you can simply write in your own target grammar as long as your handwriting is legible. You can also use whiteout, type your new stuff in word or something and then cut and paste and then run it through a copier. That’s old school, but I’m willing to be at least some of you have never thought of doing that before which is pretty sad… 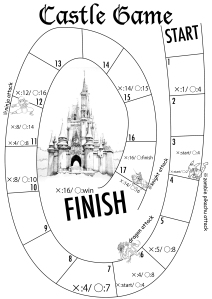 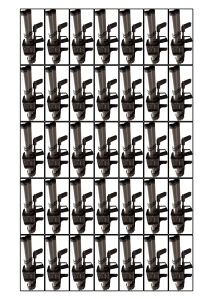 Bazooka cards. One sheet should be enough for a class of 35-40 kids.

Give the students a target sentence to use, like “I *verb* *whatever works to end the sentence*”…

You can make it more complex if you want where the students have to pick a subject based on the roll of the dice: 1: He 2: She 3:We 4:They 5:Pikachu 6:I

If you need more help then you can watch my instructional how to video on YouTube.

Read like Japanese manga right to left. Pick a grammar point and have the kids finish the story. They have to draw their own endings.

Read like Japanese manga from right to left. Students will create their own dialogue and draw their own picture to complete the story.

Students will give directions like, “Go straight” “Turn right” “Turn left”, it can be made more complicated by giving them more dialouge options like “Take a bus from No. 1 bus stop to…” “Go straight for two blocks” “Look to your right” etc.

Who Am I Game

Who am I? game

In pairs one student picks a character, the other interviews to figure out which character their partner chose.

Past Progressive, Who Am I Game

For the large size print all 3 on to A3 sized paper and then put them all together.

Divide the students into groups. Give each group a set of  cards. Call out a random number. They have to arrange the cards on the blackboard to spell out the number. First team to complete it gets the point. I think there should be enough letters to get to at least 0ne-hundred, possibly up to 999, but I only made sure it would to up to 100… this takes a lot of time beforehand to prepare.

I call this the “bomb” game, but in this particular worksheet I’ve not used bombs. This was introduced to me by a JTE last year. You can use this structure anywhere for any grammar really. You can use this in groups of 3-4 or as an entire class with you giving the answers and the students asking the questions.

Basically you use a target structure like in this example, “Is this _______ made in Japan?” You give the students a set of options. I’ve used: fan, umbrella, soup, robot, katana, space ship, anime, and car. One student picks his/her answer, but doesn’t tell the other students. Then the other students must ask him/her using the target sentence. If the answer to the questions is negative, “No, it isn’t,” in this case, then the student who posed the question is safe and the next student will ask their own questions. Each item can only be used once. If a student guesses the correct answer then unfortunately they lose. The aim of this game is to not get the right answer. If the students guess all of the items and there is only one item left, so it is obviously the answer, then the student who answers, “Yes” and “No,” is then by default the loser of the round.

The worksheet that the JTE gave me used little bombs. When you guess the right answer essentially one bomb exploded. Of course you don’t want bombs to blow up in your face so the aim of this game is to escape unscathed or as undamaged as possible. For my game I’ve used the pirate in a barrel game. The one where you stick swords into the barrel and if nothing happens you’re safe, but if you stab the wrong part of the barrel then the pirate pops up and you lose. Maybe not less violent, but the game is familiar to the kids so it cuts down on explanation. When the students lose then they have to color in one of the swords on their sheet. At the end of the activity the student with the least number of swords colored in are the champions.

This picture I use for when the students must practice the comparative. I make cards where I write vocabulary they are familiar with, e.g. stronger, faster, longer, cooler, more delicious, smallest, cutest, the most handsome…etc etc etc… And I give the students a sheet with lines numbered 1-12.

I put the vocab cards in a basket and the students form 4-man groups. They have to come and pick a random card and then use the characters/places on my picture to make sentences. Each animal/character/place they can only use once. Each comparative card they can only use once as well. I usually let them roll a dice upon each completed sentence to get points and keep track of the points on the black board. Team with the most points wins.

12 answer sheet English and Japanese answers (students have to write the English sentence and translate it so we know they understand what they’re saying.)

This is for at the end of 2nd year or beginning of 3rd year. One person picks a character. That person can only say, “Yes, ” and “No.” So you have to ask simple questions. The ones we used were:

I play this as a class where the JTE asks me questions and I answer. The students keep track and try to figure out who I am. I also do this with the students divided into their rows. They have to ask me questions in order and the row that figures out who I am wins. They kids can do it in their small groups as well. And finally, I’ve done this with the JTE and I on opposite sides of the room. The students in their groups must come to us and ask us questions, one question at a time. The group that figures out who we are gets points. Then we yell out, “RESET!” so the class knows our character was solved and we’ve picked a new character. I usually give points for each question asked and then bonus points for the team that solves your character. You must give negative points for incorrect guesses though to keep students from just randomly trying to guess who you are.

I use this sort of game for lots of grammar points in all 3 grades. 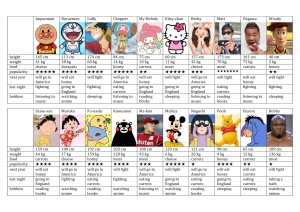 first year are you game (same concept, no pictures)